Brother Toad and the Giants 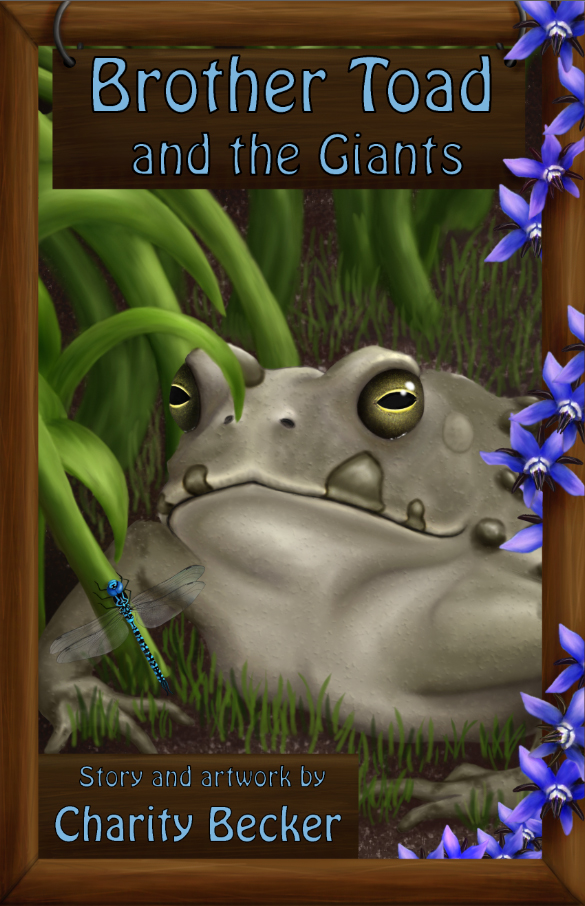 Brother Toad and the Giants

Giants are mean and hate everyone; dragonflies are food, not friends; and nobody is as important as the toads. That’s what the Wise One says, at least. But one curious little toad, fresh from the pond, asks, “Why?”

In fact, he has a lot of questions, so Brother Toad sets off into the Big Wide World, seeking answers. Along the way, however, he finds trouble. . . big trouble. When the giants pollute and destroy his wetlands, it’s up to Brother Toad to save his family.

With the help of some unlikely friends, Brother Toad learns the truth about the giants, the dragonflies, and the Big Wide World. In the end, he proves that everyone is important, and that even one little toad can make a big difference in the world—he just has to be brave, curious, and clever.

Based on a true story, this family-friendly tale encourages everyone to ask questions, explore the world, and learn about the people and creatures in it. With an emphasis on conservation and kindness to nature, this book blends an action-packed story, beautiful, hand-painted artwork, an informative non-fiction section, and a special invitation from the author to create a wonderful book for all ages.

A portion of each sale will be donated to Northwest Trek Wildlife Park in Washington state.

Keep reading for a sneak peek!

When I was a tadpole, freshly hatched from my egg, I heard the soothing voice of the Wise One telling tales of the Big Wide World. He spoke of beautiful things outside the pond, like mayflies with their delicate wings of shimmering lace, and swaying cattails releasing their soft fluff on the winds. He spoke of our smooth-skinned cousins, the tree frogs, singing cheerful songs into the night. He spoke of the fresh air in our lungs, the sun-warmed stones beneath our bellies, and the tasty things we would find to eat once we emerged from the water on our newly-formed legs.

The Big Wide World sounded amazing to me, full of adventures, surprises, and things I wanted to see.

My time to leave the pond would come soon. My tail was shrinking and I’d sprouted arms and legs that grew stronger every day. I could hardly wait to leave this little pond and explore the Big Wide World on my own. However, on my last night in the pond, my excitement started to fade as I listened to the Wise One’s warnings.

“Listen, children, and listen well,” the Wise One croaked. “There are wonderful things out here in the Big Wide World, more things than I could possibly tell you about. But there is danger, too.”

“What is danger?” I asked as I swam near the edge of the water and stared up at the huge, greenish-brown toad.

The Wise One looked down at me with glistening, golden eyes. “Danger,” he said, “is anything that causes you harm. Anything that hurts you. Toads must always beware the dangers of the Big Wide World.”

A shiver ran over my skin, right down to my brand new toes.

“You already know to stay away from the back of the pond, where the dragonfly nymphs swim until their wings grow in. But the dangers of the Big Wide World are many, and not so easy to avoid.”

I asked, “What dangers should we look out for when we leave the water?”

“Birds can swoop down and pluck you right from the mud,” he said with a quick glance to the sky. “Slithering snakes, creeping lizards, and four-legged creatures of all kinds would not mind eating a fat toad for dinner. Stay under cover, move slowly, and be aware of your surroundings.”

“Yes, Wise One,” I said, completely engrossed in every word he said.

“But,” he continued, “the worst danger of all comes from the giants.”

Pushing past the other tadpoles, I pressed myself against the shore. There I clung to the soft green algae as if it were a comforting blanket. “Tell me about the giants, Wise One. Do they fly like the birds, slither like the snakes, or scratch like the four-legged beasts?”

“No,” he said with a slow shake of his round head. “The giants dig up our lands, destroy our ponds, and cut down our long grasses and trees. They clear strips of land and cover them in hard, flat stone so they never grow grass again. These ‘roads’ go on for days, and in the sun, they grow too hot for toads to touch.”

I was stunned to hear that such things could happen in the Big Wide World, but I kept listening.

Quietly, the Wise One added, “And the giants do much worse things, my dear ones. Much worse.”

“But why do they do those things?” I asked.

The Wise One grunted and said, “Giants, with their loud machines and sharp tools, do not care for our kind. In fact, it seems that the giants do not care for any kind but their own.”

The Wise One stood on bent legs and moved his large body back a few steps. “But I have said enough this night. No more tales of hungry beasts and giants that devour the land. This is a special night for toadlets. Tomorrow you will leave the pond and join us in our songs. Heed my warnings and you shall all live long and happy lives here in the wetlands and meadows.”

I watched as the Wise One hopped away and disappeared into the grass. My siblings swam in all directions, giggling and playing, enjoying their last night in the pond. But my mind would not rest.

“Giants,” I whispered, trying the word on my tongue. Could these creatures really exist, or was this just an old toad’s tale made up to scare tadpoles into behaving?

I didn’t know it then, but I would soon meet my first giant, and it would be even more frightening than the Wise One had warned.

As the sun moved below the treeline the next day, the water at the edge of the pond grew cooler. All of my brothers and sisters had left the embrace of the pond in a rush the moment the sun was low enough in the sky, but I could not bring myself to take that first step. I lingered there, my nose poking out of the water, my fingers grasping a twig sticking out of the mud.

“Why do you hesitate?” the Wise One asked from under a nearby pile of stones. “The sun has warmed the ground and all your siblings have come and gone. Why do you stay in the water?”

The Wise One blinked once. “Well then, I guess that something would have a nice snack, now wouldn’t it?”

I must have looked shocked because the Wise One chuckled gently and hopped closer. “I’ve been around a very long time,” he said. “And I’ve seen a great many things. However, not once have I seen a clever toad, such as yourself, eaten on the first day out of the pond.”

“But what about the second day?” I asked, ducking my head under the water.

The Wise One let loose a laugh that jiggled his pale belly. Dragonflies shot into the air and whizzed around the pond in response.

Still laughing, he said, “That kind of thinking will keep you safe.”

“Even from the giants?” I asked.

“Come out and see the Big Wide World, little one. See for yourself that it’s full of beautiful things.”

“But the giants!” I squealed.

“Stay away from the road at the edge of the meadow and you’ll avoid the giants.” He paused, as if waiting for my response. All I could do was sink a little deeper into the pond and stare at him.

The Wise One shook his head and sighed. “Worry no more, little one. The giants are not important. Come out, feel the ground, the grass, the wind. Be brave. Be curious. Above all else, be clever.”

“But why? What will being clever do for me?” I asked.

The Wise One turned his bulky, warty body around. Before he hopped back into the shade he said, “The cleverest toads live the longest.”

In moments, the Wise One had fallen fast asleep under his rocks, filling the air with rumbling snores and deep grumbles. I stayed in the pond, thinking.

Of all the things that could eat me, squish me, or hurt me, the giants frightened me the most. But even while I shivered at the mere mention of those mysterious creatures, I was still curious.

What did they look like? Why did they dig and cut and destroy? The Wise One said the giants didn’t care for toads, but he never said why.

The dragonflies had settled on the cattails around the far, shady side of the pond by the time I took my first step onto land. The squishy mud felt good between my toes, and my first big breath of air filled me with energy. All around were the sounds of my siblings frolicking in the long grasses, playfully calling to one another. Just knowing they were all safe and having a good time helped me feel brave.

Slowly, I hopped away from the Wise One, the pond, and my siblings. If the meadows and wetlands were full of beautiful things like the Wise One said, then surely the rest of the Big Wide World was full of even more beautiful things. Why should toads stay in the wetlands if the world had so much to offer?

“Be brave,” I whispered to myself. “Be curious. And be clever.”

With one quick look back over my shoulder, I hopped toward the Big Wide World. . . and the giants.

written by +Charity Becker in Books by Charity becker, Kids and Family